On October 24 and 25, HSBC held it’s 2018 Argentina CEO / CFO Roundtable convention in Buenos Aires. Central Puerto, as the largest private electricity generation company in Argentina, was invited to give its vision on the sector in the panel called “Bringing back the light”.

During his presentation, Jorge Rauber, CEO and Vice-President of Central Puerto expressed his point of view on the priorities for the coming years for the generation segment.

Followed by an audience of international and national investors, he indicated that “during the last years the sector has overcome the lack of power during peak demand moments. The challenge for the coming years -he said- will be to increase the efficiency in electricity generation, in order to reduce the costs of power generation”. In relation to this, he argued that the investments that generators, such as Central Puerto, are developing in both the renewable energy and thermal energy segments, and the gradual increase in the use of natural gas thanks to the surge in the production of Vaca Muerta -instead of using more expensive and polluting alternative fuels- will play a fundamental role in the future.

In this regard, he highlighted the recent inaugurations of the Achiras I and La Castellana I wind farms for a total of 147 MW. For the years 2019-2020, central Puerto plans to add another 659 MW to the national energy grid, from which 236 MW will be in renewable energy projects and 423 MW will be in new and highly-efficient thermal projects. The total estimated CAPEX for the projects under construction will reach US $ 680 million.

Previously, during the same conference, Mr. Javier Iguacel, Secretary of Energy of Argentina also participated in the event. During he’s exposition, he highlighted a) the goal of adding 5,000 MW of new renewable installed capacity the goal of supplying the 20% of the demand through these energy sources by the year 2025, b) the construction of new high voltage lines through the Public-Private Participation Program (PPP) tenders, and c) the development of the Electronic Gas Market (MEGSA) in order to supply fuel for the electric energy generation segment more efficiently and economically.

Regarding the development of the Oil & Gas sector, he said that Argentina will double the production of natural gas and oil in 5 years thanks to the advances in the exploitation of unconventional oil and gas resources.

Regarding the regulatory framework of the electricity generation sector, he affirmed that tariffs will continue to be set in US dollars, since most of the investments that the sector is making are denominated in that currency. 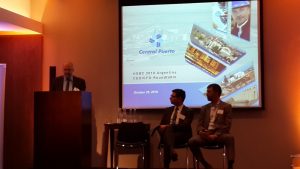